Uncover the history and culture of ancient Greece and Greek mythology. Thousands of years of history. Greek mythology. Gorgeous islands and beaches. Ancient ruins. Delicious food. Greece has a lot to offer! Experience the Greek lifestyle and tradition with a private tour ideal for a couple, a family or group of friends. A visit to the land of Homer, Aristotle, and Sophocles is a journey to the dawn of classical civilization, with archaeological splendors from Athens to Crete. The varied landscape appeals to all types of travelers, whether you enjoy mountains or beaches, big cities or small villages. The soaring Mt Olympus inspire awe, while peaceful fishing villages such as Nafplio and Galaxidi invite simple pleasures and a taste of the good life on the Peloponnese land. The Greek countryside presents the perfect coda with idyllic landscapes of cypress groves, vineyards, and olive trees, as well as dramatic coves with sparkling white sand and rugged mountains that plunge into the sea.

Travel to Greece with its idyllic climate, archaeology treasures, dramatic vistas and hearty cuisine that embodies all things Greek. On this small group tour journey, you’ll delve into one of the most fascinating and coveted countries in Europe.

PRIVATE TOUR FROM ATHENS TO ATHENS

Arrive in Athens Airport and travel to the city center for a two nights stay at the first-class ”ELECTRA METROPOLIS HOTEL” or similar, a charming boutique hotel which enjoys an excellent location close to the city’s architecturally treasures.This evening we gather for our first dinner in an elegant restaurant boasting amazing views over the Acropolis.Overnight in ATHENS

We meet at the Electra Metrapolis Hotel for a guided walking tour of ATHENS visiting the ACROPOLIS, one of the great ‘Wonders of the Ancient World’. Ascending the hill, you’ll soon experience the Parthenon itself – its blindingly white marble columns with their perfect symmetry and balance completely dominate the skyline.We continue to the new ACROPOLIS MUSEUM, with its amazing glass floor displaying ancient houses, streets and even an olive press below.Exhibits include superb sculptures and an incredible series of carved pediments from the temple of Athena. After an included street food experience, you’ll end the day with a panoramic tour to the most important monuments and landmarks of the city.Enjoy the rest of the day on your own.Overnight in ATHENS

Sun,sand,art and antiquity all lie south-east of Athens in SOUNION. Drive along the picturesque south Attica coastal road for a discovery of the spectacular white marble TEMPLE OF POSEIDON, erected in the middle of the 5th century BC to honor Poseidon, god of the sea,sits atop a cliff 195 feet over the Saronic gulf.Today, the archaeological site at Sounion is one of the most photographed in Greec.After an included lunch in a local fishing restaurant, return to Athens for the afternoon at leisure or take advantadge of an included entrance to the National ARCHAEOLOGICAL MUSEUM, one of the most important museums in the world devoted to ancient Greek art.It contains the richest collection of artefacts from Greek antiquity worldwide and some of the most important artefacts from a variety of archaeological locations around Greece from prehistory to late antiquity.The evening is at leisure to make your own discoveries or simply wandering the colorful winding streets and alleys of Athens. Overnight in ATHENS

After breakfast, we depart for the PELOPONNESE, the rocky peninsula home to many of Greece’s greatest archaeological sites. The tour begins with a drive along the coastal road for a stop at the impressive CORINTH CANAL, the 6 km long and only 21.4 meters wide canal which separates the Peloponnese from the Greek mainland (short stop).Drive to the NEMEA region, one of Greece’s premier wine-producing areas, famous for its full-bodied reds, many produced from the local AGIORGITIKO grape,a dark, fruity red often referred to as the “blood of Heracles”.Here we visit a well-known winery for a wine tasting followed by an included light lunch.We end the visit to the mighty fortified palace of MYCENAE, destroyed in 468 BC where you will see the Beehive Tombs,the Treasury of Atreus, the Lion Gate and the remains of Agamemnon’s Royal Palace.Spend the next two nights in the attractive town of NAFPLION, the first capital city of Greece with its Venetian charm staying at the central “CASTELLANO HOTEL & SUITES” or similar.With its marble pavements,looming castles and remarkably homogeneous architecture,NAFPLION is a stage set of spectacular Venetian fortresses, Greek churches and neoclassical mansions.Dinner is on your own this evening.Overnight stay in NAFPLION

This morning we reach nearby EPIDAURUS, birthplace of Asclepios – the god of healing, and whose sanctuary here became the greatest center of medicine in the Classical world.The ancient Greeks believed that one should be healthy in both mind and body, so the plays and music performed here in the acoustically perfect theater played an integral part in the therapeutic process.With its marble pavements, looming castles and remarkably homogeneous architecture, NAFPLION is a stage set of spectacular Venetian fortresses, Greek churches and neoclassical mansions.The first capital of Greece is one of the most elegant and romantic cities, a wealth of narrow alleyways and a lovely seafront promenade but the best is perhaps just watching the sun coloring the bay an ecstatic red.In the evening, we meet up in the house of a Greek family for a COOKING LESSON accompanied by a light dinner.Overnight stay in NAFPLION

DAY 6: OLYMPIA-BIRTHPLACE OF THE OLYMPIC GAMES

This morning we head west through the beautiful Peloponnese countryside towards the ancient site at OLYMPIA, home to the Temple of Zeus, one of the Wonders of the Ancient World.The sanctuary not only lies in a beautiful and peaceful setting but its largely non-reconstructed remains allow a unique opportunity to visualize how this complex would have looked during its heyday. Also within the sanctuary is the ancient Temple of Hera while just outside the precinct are the gymnasium and well-preserved stadium.The archaeological MUSEUM is a treasure trove of artifacts excavated from the sacred precinct including superb architectural sculptures from the Temple of Zeus itself.Drive to the charming town of GALAXIDI for the next two nights in a small family hotel “GALAXA MANSION“or similar, near the town center.Dinner is included in a local tavern.Overnight in GALAXIDI

Today’s excursion takes us to explore DELPHI, one of the most beautiful and celebrated ancient sites. Nestled between twin cliffs on a slope of Mount Parnassus and spilling out onto the Sacred Plain, Delphi is where the oracle representing the revered god Apollo presided over the ancient world.We see the ruins of the Sanctuary of Apollo, walk the marble Sacred Way and climb to the 4th century BCE theater still in use today.We also visit Delphi’s MUSEUM that houses the bronze “Charioteer,”one of antiquity’s greatest statues.Drive to the nearby mountain village of ARACHOVA for sightseeing and time on your own for lunch.A Farewell Dinner is included this evening in a local tavern.Overnight in GALAXIDI 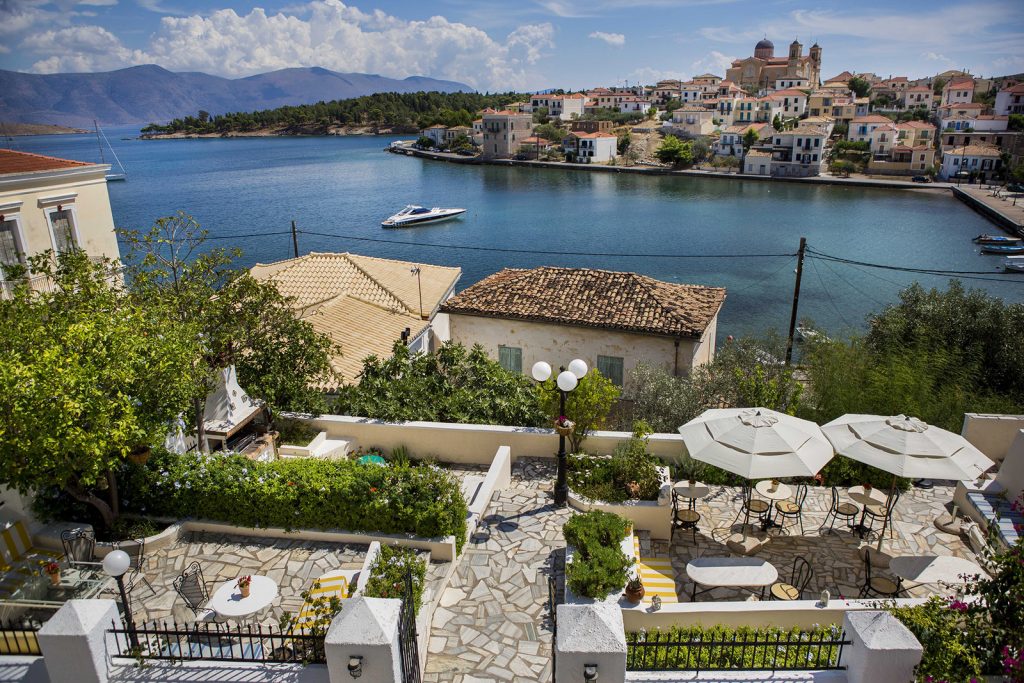