Immerse yourself in the exoticism, fascinating history, and resplendent architecture of Istanbul, where Europe meets Asia along the bustling Bosphorus Strait. You’ll step into the world of Ottoman sultans at the Topkapi Palace, marvel at the towering domes and minarets of the Blue Mosque and Hagia Sophia, and roam the endless passageways of the Grand Bazaar and the Spice Market, teeming with colourful carpets, leather goods, jewellery, and lanterns. Your four nights in this intoxicating cultural capital is the perfect way to round out your ocean expedition.From Alexander the Great to the Roman and Ottoman empires, Turkey’s colorful history has left behind remarkable cultural riches: ancient Greco-Roman ruins, Byzantine churches, Ottoman mosques, and more. On this unique adventure,discover multicultural treasures on a journey from the palaces and grand mosques of exotic Istanbul to the surreal landscapes of Cappadocia, a geologic wonderland in the Turkish heartland.

We have a real passion for Istanbul & Cappadocia and look forward to sharing it with you !

PRIVATE TOUR FROM ISTANBUL TO ISTANBUL

Arrive at Istanbul Airport and travel near the city center for a four nights stay at at the first-class ”KALYON HOTEL” a charming boutique hotel which enjoys an excellent location near the city’s architecturally treasures.This evening we gather for our first dinner in an elegant restaurant.Overnight in ISTANBUL

Our journey begins in Istanbul, the only city in the world situated on two continents. Byzantium, Constantinople, Istanbul – its three names span more than 2600 years, nearly 1600 of them as the capital of two of the greatest empires the world has known, Byzantine and Ottoman. Today, we shall start the day with a walking tour of the major historical highlights of the city such as the ancient Roman HIPPODROME, built by Septimius Severus to entertain the public at the beginning of A.D 2th century, the BLUE MOSQUE, one of the most majestic Ottoman mosques in all of Turkey, UNESCO HAGIA SOPHIA, mostly known as one of the most valuable and fascinating structures in the world of art and architecture,the UNDERGROUND CISTERN, constructed using 336 columns, many of which were salvaged from ruined temples and feature fine carved capitals. Its symmetry and sheer grandeur of conception are quite breathtaking. One of the two Medusa sculpted columns from the Roman period was placed underneath one of them and the other in the opposite direction.After an included lunch in a local restaurant, we will visit the GRAND BAZAAR,one of the oldest and largest covered markets in the world, dating from the 15th century.The remainder of the day is at leisure.Overnight in ISTANBUL

Meet your local city guide in the hotel lobby for a visit to the stunning TOPKAPI PALACE (closed on Tuesdays), then take the tram to KARAKOY neighborhood which is one of the hippiest neighborhoods of Istanbul, wander around streets, enjoy tasting some local delicacies, then take the historical funicular up to GALATA – the boho-chic neighborhood of Istanbul that the creative community loves. Wander around the streets of Galata, see GALATA TOWER, then walk down to GALATA BRIDGE to walk on it and enjoy the views of Golden Horn with the smells of grilled fish coming from the fish&bread boats. Our last stop of the day is the historical Egyptian SPICE BAZAAR, a colorful and mystical covered spice market lined with spice stalls in Eminonu coast, near the Yeni Mosque, in the Historical Peninsula of Istanbul. Spices, dried fruits, cheeses, sausages, jams, nuts and seeds, Turkish delight and other edibles fill most of the shops. You are able to find about every kind of herbs and spices at the market, and as well as ingredients for cooking, Turkish delight and Turkish coffee.The remainder of the day and evening is free for independent exploration.Overnight in ISTANBUL

Start the day with a visit to the largest mosque of Istanbul, the SULEYMANIYE MOSQUE,better known as the mosque of Suleyman the Magnificent, built in the 16th century by the great Ottoman architect Mimar Sinan for Sultan Suleyman the Magnificient, also known as the Legislator. The Süleymaniye crowns one of Istanbul’s seven hills and dominates the Golden Horn, providing a landmark for the entire city. Afterwards,enjoy a cruise on the BOSPHORUS,the narrow strait of water separating the Asian and European continents and the life blood of Istanbul. Passing along the shores of the Bosphorus you will view magnificent palaces, restored Ottoman villas, impressive fortresses and the waterside residences of Istanbul’s elite. We disembark the yacht on the Asian side, wander around the local neighborhoods and then arrive to KADIKOY on the Asian side for a culinary walk in the market! We will taste amazing food from all over the country and will end the day at a pub where locals love hanging around.Dinner is included this evening in a local restaurant. Overnight in ISTANBUL

Today, we travel to CAPPADOCIA, renowned for its spectacular landscape and now listed as a UNESCO World Heritage site.Transfer to the airport for your included domestic flight to Kayseri, where upon arrival,meet your professional guide and en-route to CAPPADOCIA view DEVRENT VALLEY,a magical corner in the countless panoramic valleys of Cappadocia, an unbelievable landscape with its rock formations and savage feeling, one of the best introductions to understanding the structure of fairy chimneys. You can find animal-shaped rocks and fairy chimneys among these unusual formations. Feel free to use your imagination while exploring!Lunch is included in a local restaurant serving traditional home-cooked food.Continue to PASABAG VALLEY, where the formation of “fairy chimneys” can be best observed. Pasabag,the Pasha’s Vineyard, is surrounded by incredible natural rock formations, a spectacular scene.End the visit with GOREME OPEN-AIR MUSEUM, a UNESCO World Heritage Museum List since 1984. The oldest churches in the area date back to the 6th century. Among these churches, the most important ones are Dark Church, Snake Church, Apple Church, and Buckle Church.Drive to your hotel “CAPPADOCIA CAVES SUITES” or similar, for the last three night with breakfast included.Overnight in CAPPADOCIA

This morning meet your professional guide in the hotel lobby for a visit to KAYMAKLI UNDERGROUND CITY,where eight levels extend below ground and include; living quarters, kitchens, wine presses, storage rooms, stables and ventilation shafts. Early Christians carved out these subterranean complexes to avoid invaders who swept across the plains of Anatolia from the 6th to the 9th Century.After lunch on your own,stop at MUSTAFAPASA VILLAGE to stroll in the village and enjoy lunch at a local mansion, then you will drive to AVANOS which has long been a center for pottery artisans as it lies on the banks of the Red River where clay supplies are abundant. Enjoy a visit to a pottery workshop to meet the artisans and see their collections displayed in an underground cave complex.We end the day with a panoramic view of the UCHISAR CASTLE, full of towering rock houses typical of this area. Uchisar is a small town and it is situated at the highest point in Cappadocia. It is named after the enormous piece of rock in the center of the town, which was once used as a castle.Dinner is included this evening in a local restaurant boasting amazing views.Overnight in CAPPADOCIA

In the morning, visit a family and learn to prepare some of the local culinary specialties in a hands-on cooking class with an included light lunch.Afterwards, enjoy a hike in the LOVE VALLEY to experience the unique nature of Cappadocia followed by a wine tasting- either on the valley with a magical setting or in a WINERY.Then return to our hotel, where the rest of the day is at leisure and dinner on your own. Overnight in CAPPADOCIA

Check-out of your hotel and transfer to the Kayseri Airport for your included domestic flight to Istanbul. 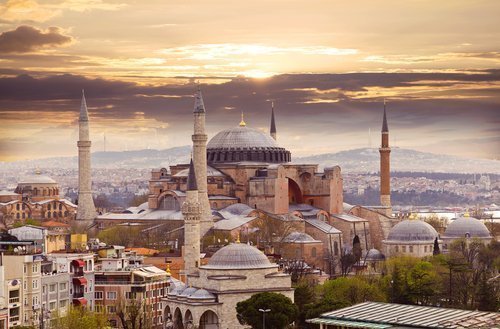