Immerse yourself in the fascinating culture of the Imperial Cities.Morocco has its roots in Africa,its history entwined with Spain,France and Portugal,and its face turned towards Europe.It is a vast country of beautiful and contrasting regions and everchanging light and colours.With its rich cultural heritage and enviable climate,Morocco is a country that can be visited all year round and over and over again,each time to explore and experience new aspects.As the landscape changes so do the people and so does the way of life,always welcoming,yet with very differing costumes,architecture,food and a different spirit of place.And the dramatic shifts in scenery suppor an equally rich range of wildlife,much of which seems to have come straight from an old oriental painting;eagles,kites,falcon,storks and ibiscan all be seen in Morocco,as can jackals,apes,gazelle,wild boar and Barbery sheep.Then there are the dense and ornate Imperial Cities of Rabat,Fes and Marrakech and the wonderful white and blue paining houses of Essaouira,clustering by the sea.Perhaps the most breathtaking intorduction to Morocco is in the labyrinthine Medina,the walled town at the heart of many cities.In its narrow lanes the sights,noises and scents of an ancient way of life,of workshops,souks and family houses and centuries-old palaces hidden behind great doors,are quite unlike anything else in Europe.But whether sleeping under the stars in the desert,bartering in a market or relaxing in the perfumed steam of a hamman,Morocco welcomes every traveller with its age-old hospitality and its fascinating and multi-layered culture.Morocco’s four great Imperial Cities of Marrakech,Fes,Meknes and Rabat have quite different atmosphere,each with its own history, customs and beauty.

We have a real passion for Morocco and look forward to sharing it with you !

Arrive at Casablanca Airport and travel to the Imperial City of RABAT for two nights stay at the first-class “LA TOUR HASSAN PALACE” or similar,a charming boutique hotel which enjoys an excellent location near the city’s architecturally treasures.This evening we gather for our first  dinner in an elegant restaurant.Overnight in RABAT

Our journey begins in RABAT, a pleasant, cosmopolitan city, and the political capital of the country.Rabat’s rich and colourful past is reflected in its ancient buildings: the 13th century Kasbah des Oudaias; the Roman settlement of Sale’ across the Oued Bou Regreg river; the roman remains of Chellah; and the great Hassan Tower and adjoining Mausoleum of Mohammed V, the present king’s grandfather. Perhaps one of the best ways to see the city, the gardens and the sea is from the famous Café Maure, while enjoying a leisurely mint tea and some local pastries.Lunch is included today in a local restaurant. The remainder of the day is at leisure. Overnight in RABAT

Meet your English-speaking driver and guide in the hotel lobby for a journey to MEKNES, which become an Imperial City in the 17th century when the reigning Sultan devoted his efforts to its transformation with massive ramparts, beautifully ornate gates, mosques, and palaces. The MEDINA is more peaceful than the larger ones in Marrakech and Fes and it can easily be explored on foot. Not far from Meknes are the ruins of the ancient Roman city of VOLUBILIS. Standing dramatically on a hillside, where hawks hover overhead, the arches and columns are intensely atmospheric.Drive to the most authentic of the Imperial Cities of Morocco, FES for the next two nights staying at the charming “HOTEL SAHRAI” or similar.Dinner is included this evening.Overnight in FES

DAY 4: DISCOVER THE SECRETS OF FES

Enclosed within twelfth-century walls,FES is the most authentic of Morocco’s Imperial cities,as well as being the country’s religious and cultural centre.Today’s discovery will transport you into another era and into one of thne world’s most ancient and fascinating medinas. Hidden away in a labyrinthine maza of winding alleys are souks selling spices,metalwork,silks and brocades,furniture makers and herbalists. Dominating all of these are the ancient tanneries where the same techniques and natural dyes-cobalt,pomegranate bark,saffvron, henna and poppy-have been used for centuries.Here you can discover such treasures as the green-tiled Kairaouine Mosque,founded in 859 and home to the world’s oldest university;the El-Attarine Medersa-a Muslim school established in 1320;the Royal Palace;the Nejjarine Fountain;the Dar Batha Palace Museum;the 17th century Danan Synagogue and in the Andalusian quarter,the splendid El-Sarjj Medersa,the old Muslim seminary.Lunch is included today in a local restaurant.The rest of the day is at leisure for more personal discoveries.Overnight in FES

Your transfer to Marrakech features a stop at the atmospheric coastal town of CASABLANCA,where rising high above Casablanca and dominating the skyline is the vast Hassan II Mosque; its minaret soars up to an incredible 690 feet. Your local guide will introduce you to this extraordinary building, one of the largest mosques in the world. Uniquely located, this splendid structure extends out over the Atlantic Ocean. 12 million people gave their own time and money to the construction of the mosque. During our visit we will see the very best of Moroccan artisan skills, from intricate wood and stone carving to magnificent gilded ceilings and intricately decorated tiles.After an included lunch in a local restaurant, continue your journey to MARRAKECH for the last three nights staying at the unique “VILLA DES ORANGERS” or similar.Dinner is on your own this evening.Overnight in MARRAKECH

DAY 6: MARRAKESCH-JEWEL OF THE SOUTH

Marrakech is a city which makes an intoxicating assault on all the senses-beautiful and mysterious,is Morocco’s most exciting and magical city.Set against the High Atlas Mountains,surrounded by ochre pise’ walls,the city has a rich history  and architecture,reflected in its fabolous palaces,ancient kasbaths,fascinating souks and glorious gardens..The ancient medina behind its twelfth-century walls,abuts the “Nouvelle Ville” of the 19th century.Mule carts weave between modern cars,satellite dishes rise above the roofs of the oldest houses and fashionable restaurants and shops are hidden near souks,where trades and crafts have continued unchanged for hundred of years.Marrakech is a place of primary colours;cobalt tiles,green-glazed roofs, and red and saffron yellow rugs. The smell of Marrakech is distinctive;wood-smoke,spices and aromatic resin,with occasional bursts of sweet-smelling steam from a hamman or honeysuckle from a hidden garden behind a high wall.The rhythm of the city is heard as an echo of tam-tam drums and in the call to prayer from the minarets,but also in the silence of seemingly forgotten lanes,or peaceful roof terraces above the bustle of the souks.The place all this comes together is in the Jemma el-Fna,a wide, open space that is the heart of Marrakech.The Saadian Tombs,an ornate 16th century mausoleum,are one of the finest examples of Islamic architecture in Morocco. By contrast,the lush peace of the Majorelle Gardens evolved as an artist’s retreat in the Nouvelle Ville in 1920s.Here cacti, vines and tropical flowers tumble around waterways,mosaics and high walls painted in almost unimaginably vibrant greens and bright blues. But Marrakech has many other delights; there are surviving foundouks,the galleried ancient caravanserai, the distinctive Jewish quarter,the ramparts changing from ochre to rust in the changing light and storks nesting between the castellations;ornate city gates and minarets.Anything seems possible in this unique and timeless city.Overnight in MARRAKECH

DAY 7: MARRAKESCH ON MY OWN

Enjoy a free day in Marrakech.Perhaps visit the Majorelle Garden and YLS Museum. Maybe book a traditional hammam. Or just enjoy exploring the city!In the evening celebrate your Morocco adventure with an “Good-bye dinner” sharing travel memories and toasting new friends.Overnight in MARRAKECH

Check-out of your hotel and transfer to Casablanca airport 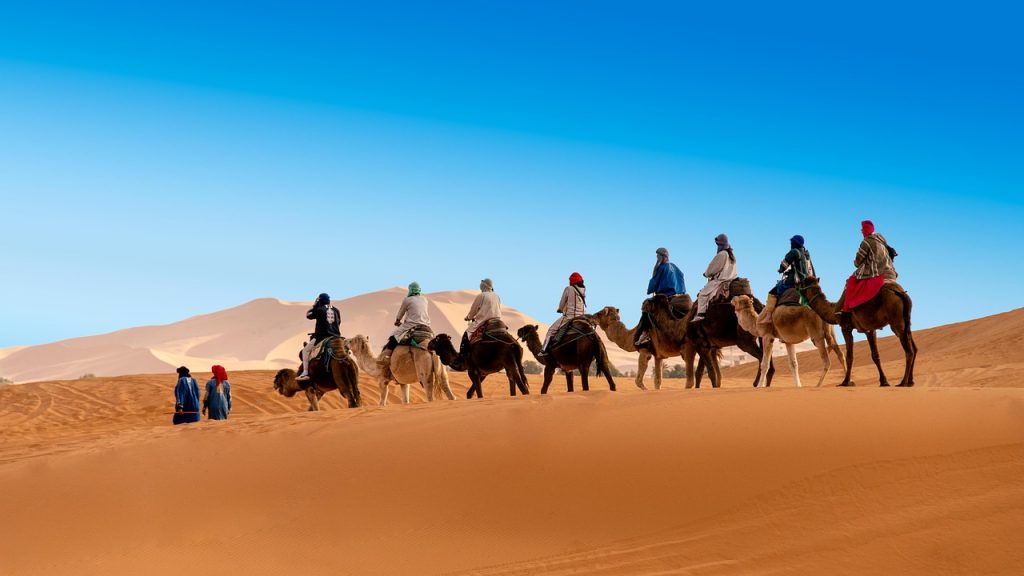