DUBROVNIK,SPLIT & THE JEWELS OF THE DALMATIA COAST GULET CRUISE

Experience the Croatian lifestyle and tradition with an gulet cruise tour! Ruled for 2,000 years by some of the greatest powers of their time: The Romans, Byzantines, Venetians and the Habsburgs amongst others, have all left their mark both architecturally and culturally. There are Roman palaces, amphitheatres, baroque churches, imposing civic buildings and even mosques. Dubrovnik in particular is a delight, almost a living museum, medieval in character with a heavy influence of the baroque period in the numerous churches and where life spills spontaneously onto its pedestrianised marble streets.

The Dalmatian coastline is legendary: one of the most dramatic in Europe, extending for hundreds of miles, where steep limestone cliffs plunge into sapphire-blue waters. Just offshore the mirror-like Adriatic is studded with countless islands, some tiny, some large, some inhabited, some not, but giving scenery almost reminiscent of a series of huge intertwining lakes. The hillsides are clad in a green carpet of lush pine-forests giving that instantly recognisable Mediterranean aroma to the air. Clinging to the coast or nestling in picturesque coves are medieval fishing villages, with tiny shops, refreshingly free from tasteless development, where the alleyways are simply pebbles set into the earth and overhead shutters precariously sway and squeak in the warm, gentle breezes. Life continues much as it has for centuries with the elderly still clad in black, so typical of southern Europe. Whilst this is a unique country, the Croatians appear very much Mediterranean in character: effervescent, friendly and open. Great importance is given to the kitchen offering delicious dishes of the Croatian and Mediterranean cuisine,being heavily influenced by nearby Greece and Italy. Everywhere you find exquisite fish like sea bass, tuna and bream fresh from the sea and cooked in a variety of ways. Excellent meats abound too and fresh colourful Mediterranean vegetables such as peppers, aubergines and courgettes, combined with olive oil, create tasty, healthy menus.

We have a real passion for Croatia and look forward to sharing it with you !

Read what our friends say about this fantastic small group tour

GULET CRUISE FROM DUBROVNIK TO SPLIT

Meet your tour manager and the group at 09.30 for a guided tour of the stunning medieval walled town of DUBROVNIK, explaining the city’s landmarks and intriguing history. Dubrovnik threw off its Venetian masters in medieval times and founded a commercial empire, trading with the eastern Mediterranean, France, Spain and, later, the Ottoman Empire. The economic boom that resulted in the ‘Pearl of the Adriatic’ found beautiful expression in the likes of the Rector’s Palace, now a museum, and Sponza Palace, currently housing centuries of historical city documents. The main avenue, lined by enticing shops and cafés, is completely paved with marble, which strikingly reflects the midday sun. After lunch on your own, you will be transferred to the harbour where your superior gulet awaits you.Welcome cocktail on board and beginning of the cruise towards SIBAN,the biggest island of the ELAFITI ARCHIPELAGO where there are manyh architectural treasures of the Middle Ages.A welcome dinner is served tonight onboard to celebrate the start of a memorable cruise adventure.Overnight stay on board

As you rise refreshed in the morning and enjoy a leisurely breakfast,we navigate to the seductive ISLAND OF MLJET,the southernmost and easternmost of the larger Adriatic islands of the Dalmatia region of Croatia.The hillsides are clad in a green carpet of lush pine forests bringing that instantly recognisable Mediterranean aroma to the air. Nestling in picturesque coves are medieval fishing villages, refreshingly free from tasteless development, where the alleyways are simply pebbles set into the earth and overhead shutters sway precariously in the warm, gentle breezes. Life here continues much as it has for centuries.Here, you will have the opportunity to sunbathe, swim and visit the MLJET NATIONAL PARK which covers the island’s entire northwest part, and also includes Soline Bay and two lakes (“Malo” and “Veliko”). The lakes (“small” and “large”) stretch for approx 4 km (2,5 ml). In the middle of Veliko is the small Melita Island (Sveta Marija) best-known for its Abbey (12th-century Benedictine monastery, now restaurant). In an attempt to ease their shipping transport, the monks dug a channel from the large lake to Melita’s south coast, thus filling two fresh-water lakes with seawater.In early-20th century, mongooses (small feliform carnivorans native to Asia and Africa) were introduced on Mljet Island in order to reduce the large population of poisonous snakes. However, after the mongooses completed the task, they also killed much of island’s birdlife.Overnight stay on board

After breakfast,we navigate to the spectacular KORCULA ISLAND,an area rich in historical value where you find most of the Venetian architecture. Aftern your included lunch and time for swimming, enjoy an included visit to the historic town of KORCULA. Ruled by the Venetians for 800 years, it is rather reminiscent of a much smaller Dubrovnik, with its host of tangled lanes so typical of medieval Mediterranean ports. The town is a charming small fortress, celebrated for supplying timber for the wooden walls of Venice and its harbour was a major shelter for the Venetian fleet. You’ll find architectural gems at every turn in its narrow cobbled streets. Famous for its artistic and musical traditions, Korcula has its own unique sword dance, the ‘moreska’, and a form of a-capella singing, but is much more famous as the birthplace of the explorer Marco Polo. His house can still be visited, as can the All Saints museum with its glorious collection of Byzantine icons.After our guided walking tour, you are free to explore this beautiful town further.Dinner is included this evening in a local restaurant this evening.Overnight stay on board

After breakfast departure towards DEVIL ISLAND (HVAR).Frequently hailed as the “new St-Tropez”, Hvar island is clearly one of Croatia’s top islands.One of Hvar’s major features is sunshine. Hvar island boasts 2718 hours of sunshine a year, making it Croatia’s sunniest island. The heavily-indented coastline is dotted with pebbly coves while the interior mixes rolling lavender fields with pine-carpeted hills. After an included lunch, you will have the possibility to explore the small city of HVAR, boasting perfectly well-preserved preserved Venetian-style architecture.Overnight stay on board

After breakfast, navigate to VIS ISLAND, off the Dalmatian Coast,amous for its culture and historical heritage and of course for natural beauty.Following an included lunch, we shall be visiting the island. On the northeastern coast, Vis town is the oldest settlement on the island. In addition to interesting ruins from the Greek and Roman period, there are villas and churches dating from the 16th and 17th centuries. The highlight is undoubtedly the Archaeological Museum which contains several exquisite Greek sculptures.The natural vegetation of Vis Island includes pine trees, carob trees and citrus orchards as well as exotic species such as palm trees, cacti and a particularly rare silver palm tree. Much of the island is devoted to vineyards that produce the famous white wine, “Vugava” and the red wine “Plavac”.Wine making has a long history on Vis Island, dating back to the Greeks, and it’s very much alive today.Overnight on board

After breakfast, sailing to MILNA on the west coast of BRAC ISLAND,the longest and most elevated island in central Dalmatia,48km long, 14 km wide, covering 394 square kilometres.Brac is less touristed than the glittering islands of Hvar and Korcula further south. No celebrities or tycoons glide their yachts into Brac harbors nor do politicians stroll village steets. For that reason, it provides an excellent window into authentic island life, particularly in the interior.It is also well known for its marvellous bay where the ships of the Emperor Diocletian had been found. And this was a secure harbour during the time of the construction of his palace in Split.Brac is most famous for its beautiful white building stone which has been exploited since ancient Rome.The Diocletian Palace in Split was built from Brac stone and it is still used in the construction of buildings as far afield as Europe and north America.Milna is one of those typical Mediterranean fishing villages they don’t make anymore. Its harbour is drop-dead gorgeous as it digs into the island like a spoon. To each side of the harbour stretch sand and pebble beaches including the cove of Vlaska.Don’t miss the OLIVE OIL in Brac! The olives are of a rare variety called buhavica and there’s over a half-million trees. Olive cultivation dates back to the Venetian years. Back in 1655 the Venetian senate insisted that the island be carpeted with olive trees and imposed fines upon anyone with the temerity to damage the trees.Overnight stay on board

After breakfast, navigate to the Dalmatia capital of SPLIT.After an included lunch, we shall be visiting the city principally famous for a single building, the World Heritage Site DIOCLETIAN’S PALACE, one of the greatest structures of the Roman Empire.We have a guided walking tour of this fascinating complex which has recently been used as the setting of the TV spectacular Game of Thrones.Back on board enjoy an aperitif before a last dinner in one of the best restaurants in Split.Overnight stay on board in Split

DAY 8: END OF THE GULET CRUISE

Breakfast on board and end of the cruise.Enjoy an included transfer to Split airport at 09.00

Price is per person based on double cabin occupancy for 8 days/7 nights. The boat can also be hired privately. Please enquire for a quotation. 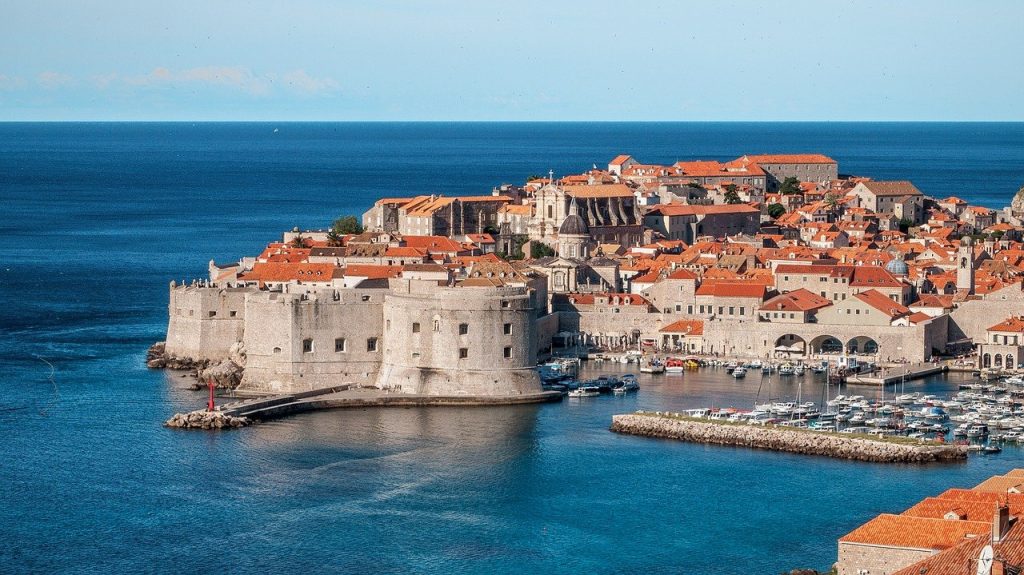