Experience the Spanish lifestyle with a private tour for the most discerning travelers! We are excited to introduce a wonderful journey to discover the best of Spain travelling from Barcelona to the intriguing city of Valencia. From soulful flamenco and daring architectures, to delicious food and avant-garde cities, Spain could be Europe’s most exotic country. Wherever you venture you’ll discover a beguiling land with a mix of stirring and often curious traditions, live-for-the-moment hedonism and a willingness to embrace the future with a relentlessly adventurous spirit. From Gaudi and El Greco to tapas and flamenco, this tour captures the energetic diversity of Spain.

Travel to Spain with its idyllic climate, dramatic vistas, rolling hills and mountains, lively markets, hearty cuisine, glorious art and architecture that embodies all things Spanish. From the warm hospitality of its people to the gorgeous beaches and balmy waters of the Andalucia to the medieval art cities. Spain is a country of rugged landscapes, sophisticated cities, rural backwaters and sharply contrasting traditions. An extravagant scenic beauty, a multicultural crossroads with a rich history, an exuberant and richly layered culture and a traditions of food and wine that is celebrated the world over..all converge here in sunny and colorful Spain

This is a land of surprises and we are excited to discover together the soul of Spain!

Read what our friends say about our tours

THE PEARLS OF SPAIN TRAVEL ITINERARY

Welcome to Spain! Arrive at Barcelona International Airport and travel to the city center for a three nights stay in a central boutique hotel “CASA SAGNIER” or similar, which enjoys an excellent location close to the city’s architecturally treasures. At 6.30 pm enjoy a welcome drink followed by a dinner at a popular local restaurant offering typical regional cuisine and wine.Overnight in BARCELONA

Explore Barcelona’s rich history, vibrant culture and cosmopolitan appeal on this guided tour through the city’s most captivating districts. You’ll see the impressive Cathedral and the charming streets of the historic Gothic Quarter. Continue to the bustling port and Olympic Village before taking in the great city views from Montjuic Hill. At Poble Espanyol (Spanish Village), you’ll have a chance to see more than 100 buildings from all across Spain, typical representations of the country’s diverse regions and cultures.After an included street food experience at the local market,you’ll discover the best known works of Antoni Gaudi, the celebrated architect.You’ll visit the extraordinary SAGRADA FAMILIA, which was less than one quarter complete at the time of his death in 1926. Though the basilica is still incomplete, it is truly one of the most inspiring church buildings in the world. You’ll also drive along the elegant Paseo de Gracia boulevard to see Gaudi’s famous modernist homes including the colourful Casa Batlló and the striking Casa Mila, designed and constructed without a single straight line.Rest of the day is on your own.Dinner is on your own this evening.Overnight in BARCELONA

Today’s trip takes you to discover the Catalonian countryside visiting the splendid natural park of the MONSERRAT Mountain and its 12th century Benedictine Monastery, home to the revered Black Madonna, and listen to the celestial tones of one the oldest boy’s choir in Europe. We then continue driving to the verdant vineyards of the Catalonian wine town of PENEDES to visit a family run cellar that has been cultivating grapes since 1385. Enjoy stunning views of the vineyards and the Montserrat Mountain while tasting 3 different Canvas accompanied by local cured meats and cheese.A light lunch is included this evening in a local restaurant.Return to Barcelona for the evening and dinner on your own.Overnight in BARCELONA

Transfer to the rail station for your scenic high-speed journey to VALENCIA, Spain‘s third-largest city, as well as one of its oldest.Upon arrival, meet your English speaking city guide for a walking tour which begins around the historic center, one of the largest in Spain. Here, you’ll not only witness examples of everyday Valencian life (such as a local market, where local specialties like horchata are sold), but also icons of the city’s history, like La Lonja de la Seda (Silk Exchange), a 15th-century Renaissance trading hall has been recognized by UNESCO as a World Heritage Site and a unique example of Gothic secular architecture.You will also visit the striking OPERA HOUSE and the church of SAN NICOLAS, known as the Sistine Chapel of Valencia.Transfer to your central boutique hotel “PALACIO SANTA CLARA” or similar for your next two nights with breakfast included.Dinner is included this evening in a local restaurant.Overnight in VALENCIA

The days starts with a short drive to the stunning NATIONAL PARK OF ALBUFERA, an oasis surrounded by rice fields, forests and the place where paella was invented.Visit El Palmar and try some typical dishes, such as all-i-pebre and llisa adobada. Savour food in a new way by learning about its origins.Take a stroll along six of the possible walking routes within the nature park, discover the water birds and plants, and have a true fishing experience in the largest lake area in Spain.We end the day with an entertaining PAELLA COOKING CLASS.Rest of the day in on your own to enjoy the best of Valencia.Overnight in VALENCIA

This morning, depart for a wonderful drive to discover the Valencian coastline visiting ALTEA and its marvellous hilltop old town with spectacular views.We then continue to the coastal town of VILLAJOYOSA for an included lunch.The pretty colourful fishing houses stretch along a wide sandy beach – ideal for a stroll, and also the possibility for a swim in the blue waters.We then arrive in ALICANTE ,the capital of the province for an included guided tour.The enchanting town and its narrow streets are dominated by the medieval CASTLE OF SANTA BARBARA. Your hotel in Alicante is the charming “HOTEL BOUTIQUE ALICANTE” or similar, with breakfast included.The evening is on your own.Overnight in ALICANTE

This morning, meet your driver and tour guide  for the discovery of the old port city of CARTAGENA.Founded by the Carthaginians around 220 B.C., the town boomed during the Roman period. The Roman Amphitheatre and the Muralla Punica (Punic Walls) are testimonies of the town`s glorious period. Standing tophill and surveying the whole bay, the Concepcion Castle has been a fortress to Carthaginians, Romans, Arabs and Castilians to defend this important naval port. A walk through Cartagena`s centre will let you discover some elegant buildings of modernist architecture, dating back to the late 19th and early 20th century.We end the morning tour with a boat trip in the harbour (approx 45 mins), enjoying beautiful views of Cartagena from the seaside.Return to Alicante in the afternoon for time on your own to soak up the beauty of this enchanting town.Overnight in ALICANTE

Transfer to the rail station for your scenic high-speed (1st class ticket) journey to MADRID, a city to savour, taste, smell and enjoy by simply exploring the streets, plazas and parks. Upon arrival, meet your English speaking driver and city guide for a discovery tour which begins in Barrio de Las Letras, the home of renowned authors from Spain’s Golden Age such as Cervantes and Lope de Vega. Continue to Plaza Mayor and Plaza de la Villa, which was once the medieval marketplace. Finish in Hapsburg Madrid which dates to the 16th century when Felipe II moved the Court to Madrid, making it the Capital of the vast Spanish Empire.Following a local street food experience at Mercado San Miguel, one of Madrid’s oldest and largest markets,you’ll visit PALACIO REAL, seat of royal power for centuries and the most emblematic building of Madrid due to its beauty, symbolic value and eventful history.Spend the last two nights at the central hotel “ATLANTICO” or similar with dinner on your own.Overnight in MADRID

DAY 9: TOLEDO- THE CITY OF CULTURES

Today’s visit takes you to discover one of Spain’s most impressive and beautiful cities, TOLEDO picturesquely sited on a hill above the River Tagus. Behind the old walls lies much evidence of the city’s rich history. The Romans built a fortress on the site of the present-day Alcazar. In the middle Ages, Toledo was a melting pot of Christians, Muslim and Jewish cultures, and it was during this period that the city’s most outstanding monument, its cathedral, was built. In the 16th century the painter El Greco came to live in Toledo, and today the city is home to many of his works. Your local guide will shed light on the great cathedral, seat of the Spanish church, with its collection of paintings in the sacristy, the Church of Santo Tome’, which houses El Greco’s masterpiece painted exclusively for this chapel, the Synagogue of Santa Maria La Blanca, an example of the mark made by the Sephardic Jews and one of the few historic synagogues in Spain. After time on your own for lunch, we’ll visit a bakery which specializes in MARZIPAN and learn about the importance of the Toledo handmade swords in the middle Ages.In the evening celebrate your Spanish adventure with an “Adios dinner”sharing travel memories and toasting new friends.Overnight in MADRID 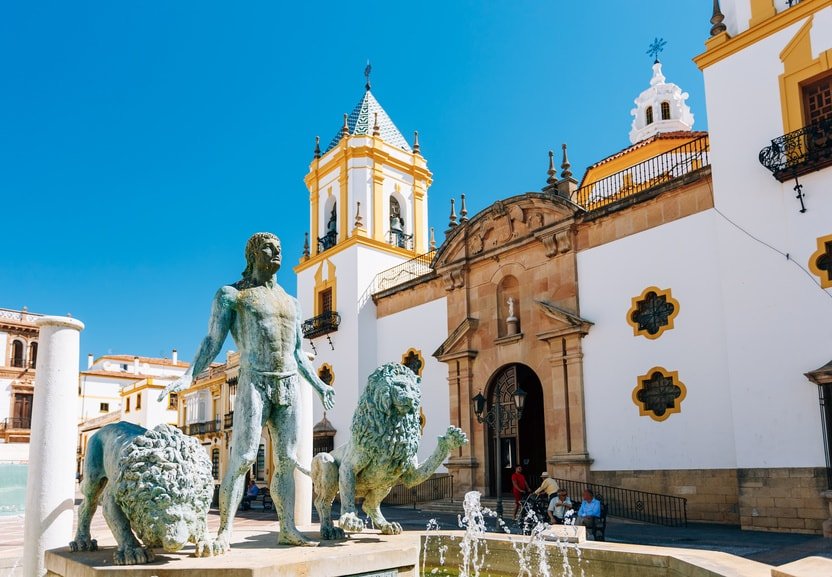 Spain, on Europe’s Iberian Peninsula, is really 17 autonomous regions, each with its own geography and culture. The capital, Madrid, is home to the Royal Palace and singular Prado museum, housing works by European masters, and Segovia to the north has a fairy-tale medieval castle and Roman aqueduct. Catalonia’s capital, Barcelona, is defined by Antoni Read more
x
x
Translate »